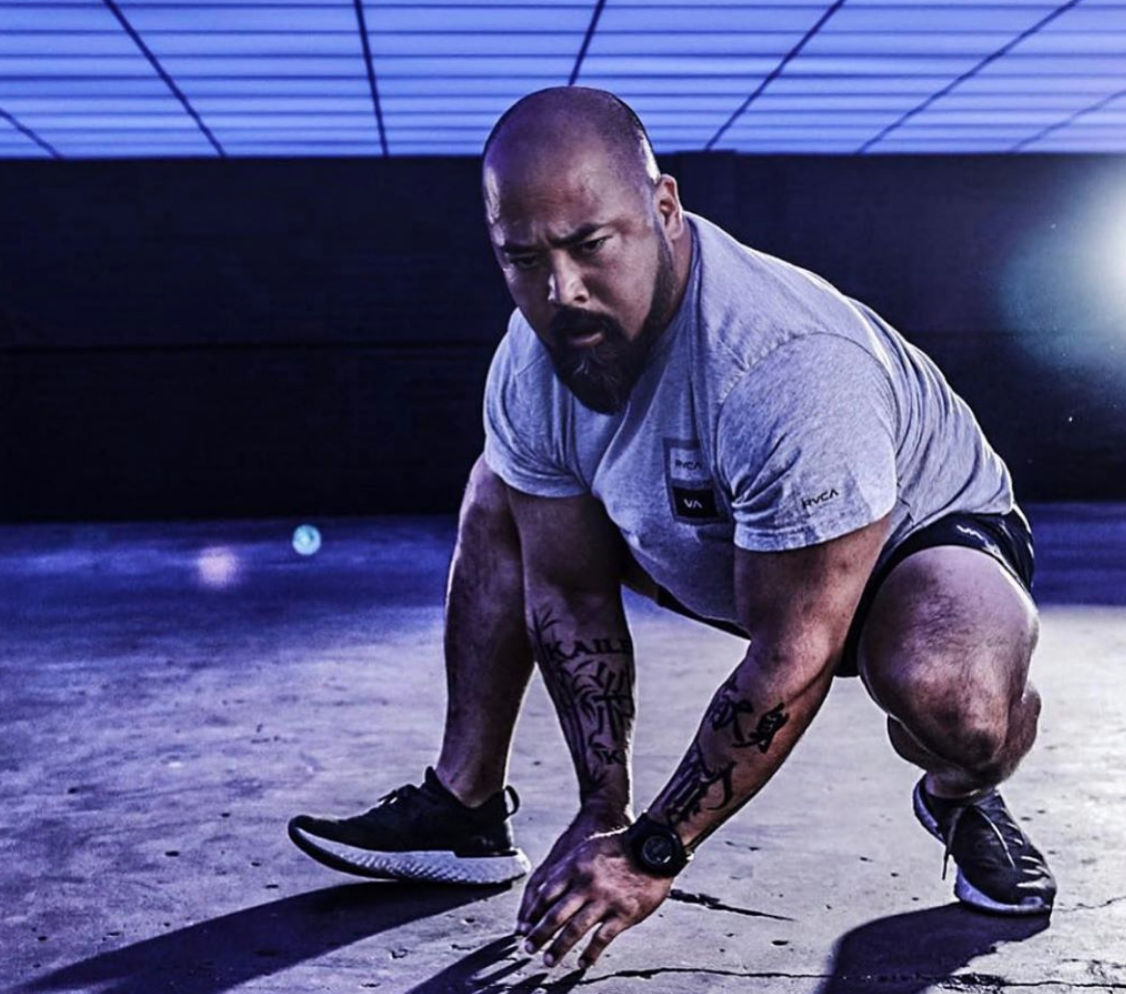 Da Rulk, aka Joseph Sakoda, is a Hawaiian man mountain with an original take on fitness. And we’ll get to that. But first there’s the matter of “Da Rulk”. Origin story, please.

“Rulk came from some of my Brazilian friends,” Rulk told me on a recent trip to Sydney where we got to chat for Men’s Health. “They used to call me “Hulk” because of my strength. But in Portuguese the ‘H’ sound is spelled with an ‘R’, so that’s why it’s Rulk.”

Rulk it is. Truth be told, though, the sobriquet is a tad misleading. Because Rulk is one of the friendliest men I’ve ever met. He radiates energy – though not the kind that busts down doors and upturns cars. It’s pure feel-good: he makes every single person on set feel as though this is their moment.

“I think in the industry, I’m known to be a little bit hardcore, a little intense, yelling at people. But in the end, I’m just a dad, you know? I just love to have fun. I love everybody. I’m always trying to hug everybody.” Can verify. Rulk administers hugs upon every first meeting.

However he’s gaining fans worldwide as one of the key trainers spearheading fitness juggernaut Centr, the healthy living app that puts Chris Hemsworth’s team in the palm of your hand.

Sakoda’s approach to Functional Training focuses on biomechanics to improve mobility, increase strength and ensure all of the body’s systems are operating at the highest level of efficiency. And it’s this unique approach, honed during Rulk’s time training first responders, that landed him front and Centr (lol) on Hemsworth’s squad of super-trainers.

“Da Rulk’s workouts look intense – and they can definitely be a challenge – but they’re also suitable for anyone that just wants to get movement back in their body,” says Rulk’s boss, ChrisHemsworth.

Happy Birthday to my brother @chrishemsworth ~ Honored to call you family my man. You are an absolute legend..Ohana always 🤙🏽🤙🏽

Mastering the fundamentals of Functional Training will help you master your own movement patterns, making you aware of your space, balance and senses – it’s a whole new style of movement, and a core component of Hemmo’s own routine.

From coaching Hollywood A-listers to his experience as a Special Ops trainer, Da Rulk helps some of the world’s toughest to be their best. Now, Centr members can also master the fundamentals of Functional Training. CENTR MASTERCLASS: DA RULK is a 13-week program consisting of a weekly workout and in-depth tutorial guided by Da Rulk.

10 Punchy Little Minutes Of Absolute Hell Is All It Takes

“The lessons in my Master Class apply to everyone and every level of fitness. In the Beginner Series we break down the fundamentals of functional training – in the intermediate series we discuss the importance of sequencing, tempo variance and other movement variables and their effects on performance – in the advanced series we take all the foundational components and push you to your absolute limits.”

On the behind his work with Centr and his latest MASTERCLASS, Rulk’s heart remains pure.

“I really want to create kind of an inclusive environment everywhere I go and all aspects of my life. It’s important for me to have that, to cultivate a positive energy around me. I think that’s important, especially right now.”

Give the below Rulk workout a try, and when you catch your breath, head over to Centr to unlock his full MASTERCLASS. Who knows, it might just unleash your inner Hemsworth.