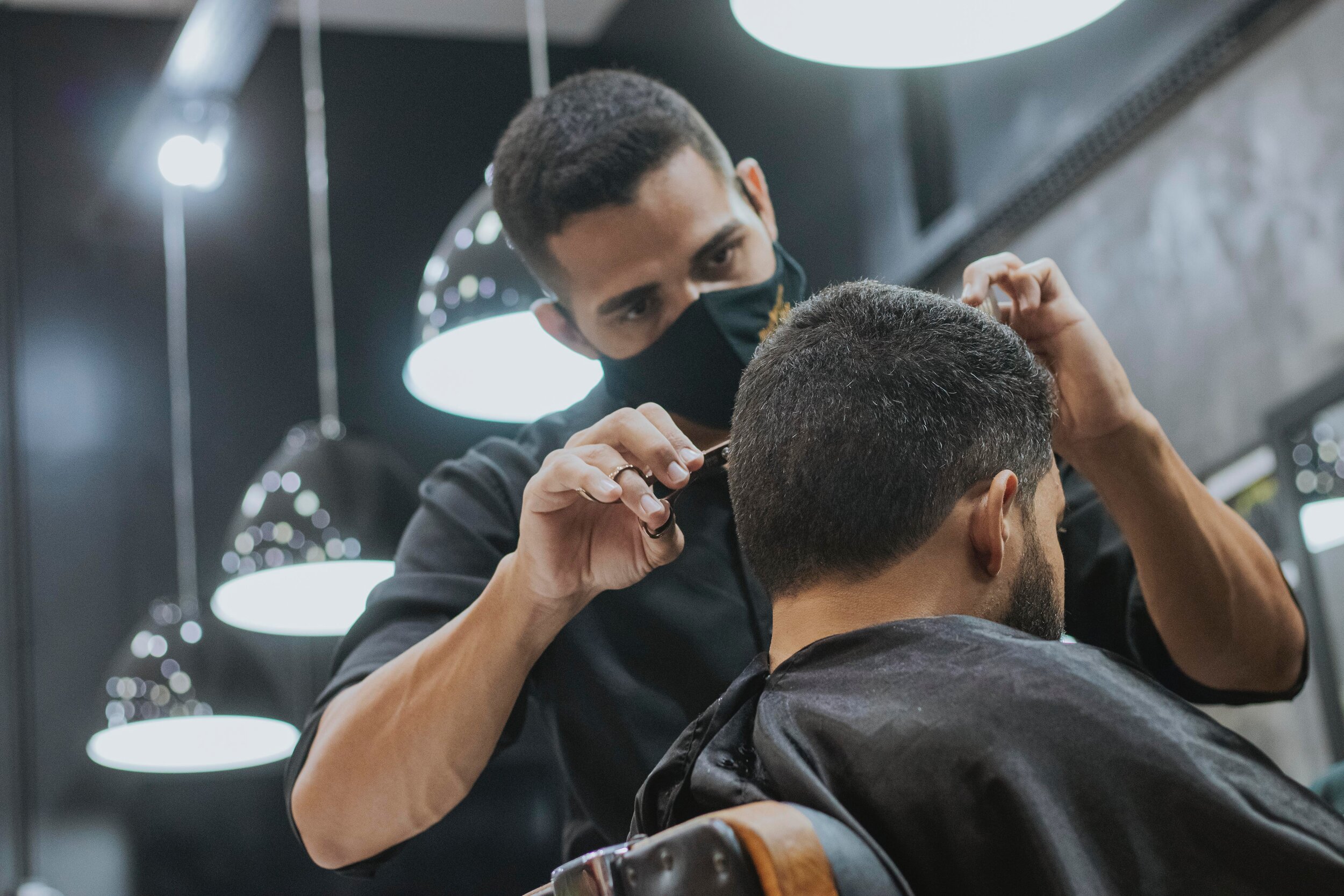 With lockdowns finally easing across the country (welcome back Vic, we missed you), we’re all emerging from our houses a little more unkempt than usual. The stubble is now a beard, the waistline is ‘thriving’ and the hair is a little more mane than sane.

And so as we head back out into the world and reconnect with our barbers, don’t make the mistake you usually do; sitting down, accepting a chop you’re not on board with, smiling and thanking your barber before going home and crying into the mirror.

What the hell went wrong? Was that guy new? Did he think you were being drafted? Did you subconsciously ask for it?

The fact is, it was probably due to poor communication. Because guys, as much as we want them to, barbers can’t read minds. If you don’t tell them exactly what you want, they’re probably going to go with whatever they feel comfortable giving you. So, if you want to avoid having a random haircut you don’t want, you have to learn how to talk to your barber.

Grooming writer Erin Docherty spoke to Dan Dixon from Mister Chop Shop for Men’s Health Australia earlier this year to get his tips on what to say to your barber so you get exactly the haircut you want next time you sit in the chair. Let’s get into it – chop chop.

Try describing Zac Efron’s hair. You can’t. So instead of giving some insanely vague directions to your barber, bring a picture to show him what you want (this is where all those hours of scrolling on Instagram actually come in handy!). Before you walk in, have a few pictures on your phone of what kind of cut you’d like. When you sit down, show your barber what you have in mind. “The more info and direction given ensures a better result,” says Dixon. Feel weird about pulling out a celebrity pic? You can also show a picture of a haircut you once had and really liked, and let your barber take you back to that moment.

Everyone’s hair is different, and knowing what kind of hair you have will help you understand what type of cut will work best. If you’re smuggling a whole heap of cowlicks under your hair, or know that your hair likes to stick up in one direction, warn your barber. They’ll be able to tell you if the cut you’re asking for is a good fit, and give you a heads up if that Leonardo DiCaprio Gatsby-era number won’t suit your face.

#3 | Give a little background

If you’re not one to use multiple (or any) hair styling products, or would never touch a hairdryer, let your barber know – because this is pretty crucial information. If you get yourself a high-maintenance haircut but aren’t willing to do all the stuff that comes with styling it, you’re just not going to have a good time. “A good barber wants to know what you don’t like as much as what you do,” says Dixon. “What products you use and what your regime, work, play and lifestyle is.”

It’s easy to cling to number settings on an electric clipper (“a two on the sides and a three on the top”), or technical terms you don’t really understand (“just a fade please, mate”), but you’re not fooling anyone. If you don’t know what it means, don’t say it. “I think the biggest mistake is using incorrect terminology,” says Dixon. “Some guys pick up words and instructions along the way and end up misdirecting a barber.” Avoid using terms like “just take a little off”, “short, but not too short”, and “just a trim” – because short and long are all relative from barber to barber. Instead, try using words like “texture” versus “sharp”, as this will make it easier to communicate what kind of look you want.

Another easy way to tell your barber what kind of length and style you want, is to focus on your ears. For example, saying “a little rough over the ears” or “clean over the ears” will give your barber a good idea of how to get you there.

PSA: You Should Be Changing Your Razors A Lot More Than You Are

If you’re seeing your barber more than once, let him know what you liked and didn’t like about your last haircut, or tell him if you liked how it grew out. “To achieve a consistently great cut, your chopper will need to know if they’ve gone off track,” says Dixon. Feedback is good, just don’t wait until your barber has finished your entire haircut before you dish it out.

If you don’t want a shit haircut, don’t be an asshole. “Be on time, be present with your barber, give them direction and create a relationship,” advises Dixon. “Leave your phone in your pocket. There’s nothing worse than a customer who constantly uses their phone. Your time is no more important than ours.”