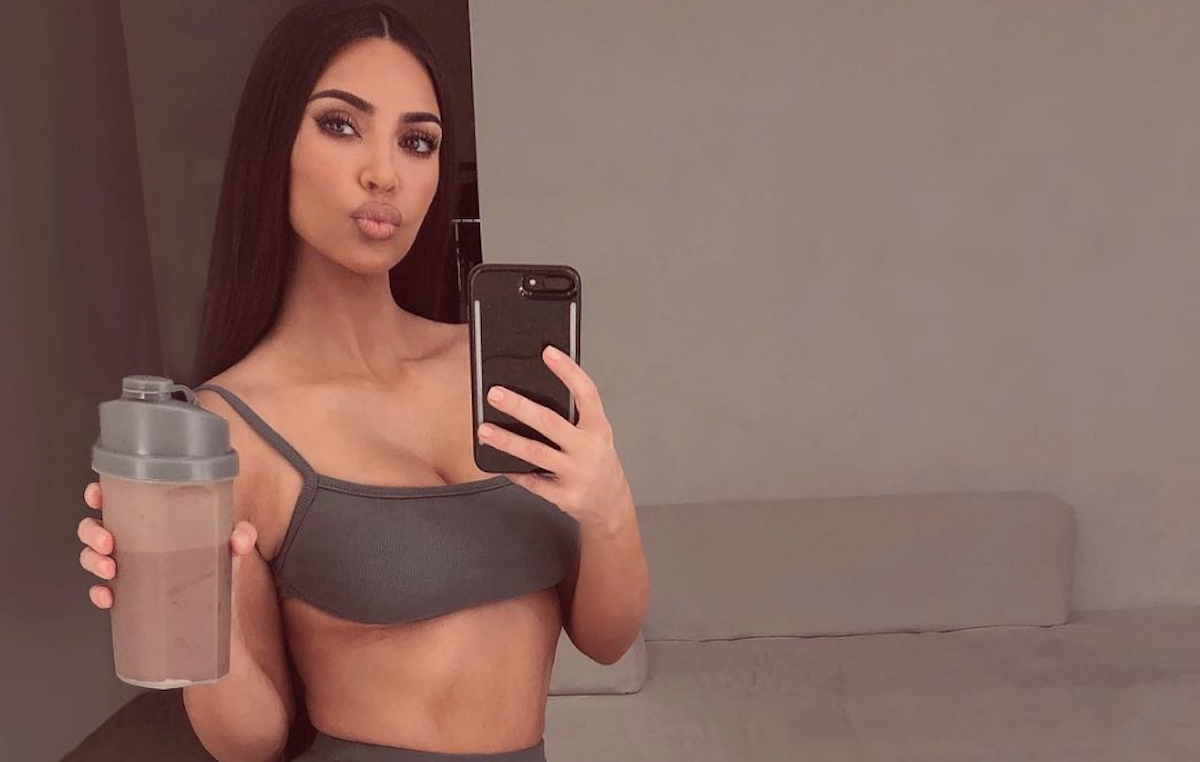 Here at sneakers, we love a challenge, especially fitness that seem a little bit off-centre. So when news started circulating that Kim Kardashian does 1000 squats a day, desire to compete kicked into over drive. “Surely not,” was literally the only thought I had when researching the story.

While rumours have surrounded Kanye’s former-better half for decades, hinting at surgically enhanced glutes, her training regime legitimately could be enough to shape her most famous asset according to her trainer. Speaking with Women’s Health, Kim’s PT Melissa Alcantara, revealed exactly how many man hours are put in at the gym to achieve her iconic figure:

“When it comes to booty and legs, we usually work out for an hour and a half to an hour and 45 minutes,” said Alcantara. “The legs are a large muscle group and need extra time to recover and rest in between sets otherwise you won’t be able to get as many reps in in the next round.”

Interestingly, despite Kardashian’s Insta Story claim of 1000 squats in a day, Alcantara doesn’t believe in ‘overworking’ a muscle group. “You don’t want to go too hard or overwork that muscle, otherwise it doesn’t have time to recover and grow,” Melissa explained. And while she’s right, it begs the question… why would Kim say she does 1000 squats with her trainer?!!

(Side note: For a woman who does 1000 squats in a day and documents her every move on TV and social media, it’s surprisingly hard to find a photo of Kim Kardashian squatting to accompanying this article… just saying.)

In the interest of journalism (and a huge sense of disbelief) I wanted, no, needed, to give it a go, to test the validity of Kim’s training. So I set a timer, and set out to complete 1000 body weight squats for time.

There were a few caveats to keep the experiment fair and accurate; a complete rep constituted the glutes going below parallel (below the knee) and hips reaching full extension at the top of the squat, feet flat on the floor (no raised toes or heels). There were also no other exercises in between the squats.

To give Kimmy K the benefit of the doubt, it’s unlikely that she conducted her own session in this manner, whipping out 1000 squats uninterrupted. It’s more than likely that she trains twice a day, and her claimed ‘thousand squats’ are amassed over these multiple sessions. However 1000 is 1000, so after a 12-minute jog on the treadmill to limber up, I gave it a red-hot crack.

To set the tone of the workout, I squat to the beats of Kanye West, because one can only assume that’s the soundtrack to any Kardashian-West workout. The music was actually a great way to keep tempo during the repetitive motion, and extremely motivational as corny as that may seem.

From the get-go, this challenge was a real dud. Not only was the challenge long, it was extremely boring. One of the most boring fitness challenges yet. “Noone’s going to know if you don’t do it, just write about it and make it up,” was a thought that entered my mind around the 200th rep, and didn’t really leave until around the 900th.

I persevered, mostly out of curiosity, and a strong sense of competition I seem to have with an Armenian-American woman I’ve never met. Weird.

My hips were the first to feel the pain, mostly because my warm-up was inadequate. With the prospect of the challenge looming, I admittedly rushed it in order to get to the main-game, and assumed that the first 100 squats would serve the purpose. They didn’t, and my time probably suffered as a result.

The 1000 squats ended up taking just over 40 minutes, burning around 2500kJ (almost 600 calories). My tactic didn’t really change much throughout the 1000; 25 squats unbroken, shake it out, then 25 more. 40 sets of 25 reps. With an average heart rate of 128bpm, the workout is a solid fat burner, although without a hefty post-workout feed, gains will be limited. (@Kim, what do you eat after your squats?!)

Could You Pass The 6 New US Army Combat Fitness TestS?

While it was undoubtedly a solid workout (fears of rhabdo were never far from mind) the real challenge came the following two days. If this is genuinely a Kimmy K training method, I’m not sure how she walks anywhere. The DOMs following this workout was extreme. We’re talking hobbling-down-the-hill, screaming-when-you-sit, unable-to-tie-shoelace levels of soreness.

I also wondered if having a strong squat was really this important to Kim. I know it’s all about the booty, but surely a quick injection would be a lot less painful, allowing her to add more fun, function and variety into her workout.

I’m no athlete by any stretch of the word, but I do have a solid enough base to know that this challenge verges on the extreme, especially if it was a regular component of training. If you had the time and resources to break up the squats, recover sufficiently, and eat like an absolute monster, then it becomes more realistic. But if you were thinking of following Kardashians lead all in the pursuit of booty gains, there are more effective (not to mention enjoyable) sessions that will get you there.

After all, in the words of Kim’s trainer; “You don’t want to go too hard or overwork that muscle, otherwise it doesn’t have time to recover and grow.” Amen.