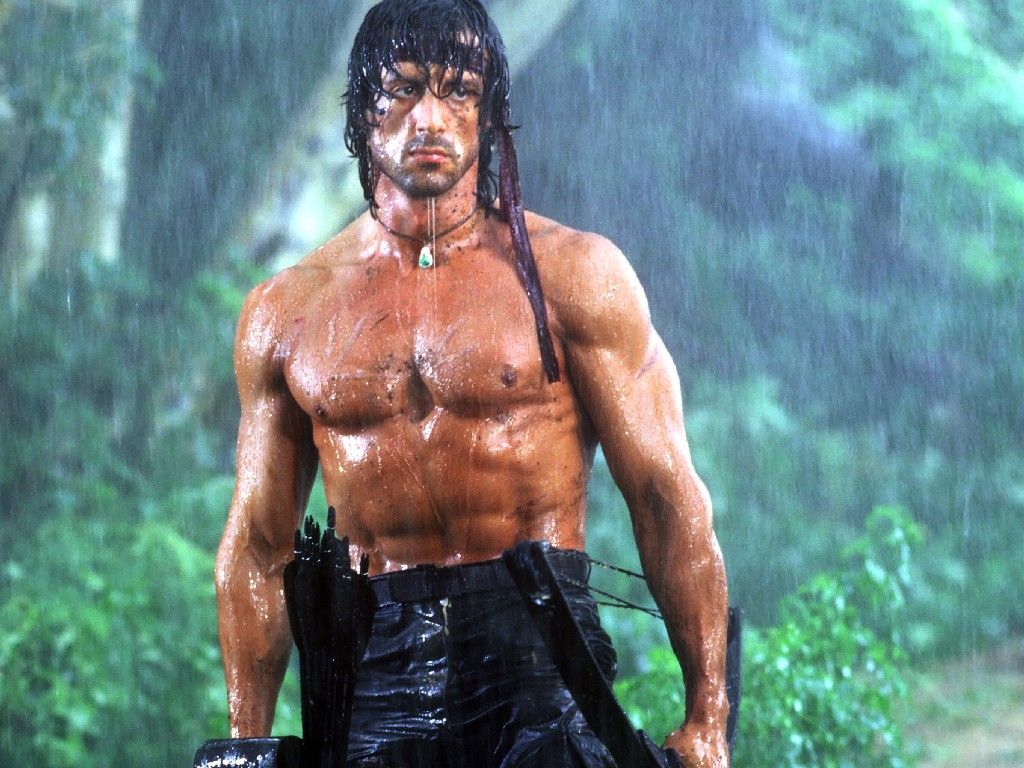 The Training Evolution of Sylvester Stallone

A version of this article first appeared in the December 2022 issue of Men’s Health Australia.

At a time when action heroes and fitness idols are being reduced to mere influencers, few true icons remain. One of these is Sylvester Stallone, who’s still thriving more than four decades after first donning Rocky’s gloves and about to star in a new crime-drama TV series, Tulsa King. His secret? Acting his age.

“SUPER STARDOM’S close to post-mortem.” Prophetic words from poet Marshall “Eminem” Mathers, penned 20 years ago as part of his career-defining ‘Lose Yourself’. It seemed an unlikely prospect back then, when the cult of celebrity was at its peak and there was no hint that social media was set to disrupt the hierarchy of fame. Yet here we are edging 2023, amid the hyper-diversification of media platforms, and if the post-mortem on “super stardom” hasn’t quite been written, the concept is certainly on its last legs. Gone are the days when we had a handful of TV channels to choose from. With an ever-expanding range of streaming and social media platforms vying for our attention, each spawning its own micro-celebrities, it’s simply impossible to attain the omnipotent brand recognition previously achieved by the musicians, athletes and action heroes of the ’80s and ’90s.

There are, as usual, a few notable exceptions – relics of yesteryear and reminders of a time before TikTok’s Khaby Lame and YouTube’s PewDiePie. These exceptions come no larger than the great Schwarzenegger, Van Damme or Ford. By comparison, modern-day action superstars don’t measure up. Marvel Studios has tried valiantly to close the gap, providing us all with a surfeit of single-use, CGI-enhanced protagonists. But none has imprinted himself in the culture in quite the same way as the classic 1980s action hero, who are now, quite literally, Expendables.

While Schwarzenegger and others have all but hung up their tank tops, there exists one big-screen mega-drawcard who continues to carry franchise after franchise on his oversized shoulders: Sylvester (Sly) Stallone.

It’s been 46 years since the muscled actor from Hell’s Kitchen, New York first stepped into the ring as Rocky. Now 76, he continues to work and train just as hard as he did when he was an aspiring actor. As his career evolved, so too did his workouts. Stallone had to keep up with the increasing physical demands of the characters he portrayed; he also had to defy the ravages of age.

Seeking workout inspiration? The complete oeuvre of Stallone can provide a blueprint for any man at any age, regardless of training goals. Whether you’re pursuing lean athleticism or guerrilla-style muscle, following a Stallone program will ensure your fitness stays firmly pre-mortem for decades to come.

Like that of his alter ego, Stallone’s real-life journey to playing Rocky Balboa is the tale of an underdog come good – albeit with fewer sprints up the stairs of the Philadelphia Museum of Art and minimal rounds with a frozen carcass. Inspired by the 1975 championship fight between Muhammad Ali and Chuck Wepner, Stallone apparently penned the boxing flick in just three days. After shopping the script around, multiple studios were interested but all wanted an established, big-name actor to bring Balboa to life. Insisting he play the title role, however, relative unknown Stallone held out – successfully – as Rocky became one of the most bankable franchises in cinematic history.

After the commercial and critical success of the first installment (Rocky won the Best Picture Oscar in 1977), Stallone knew he needed to up his game for the sequels. Impressive though he was in the original, he continually sought to improve Balboa’s onscreen athleticism and muscularity, reaching a shredded pinnacle in Rocky II (1979) – only to top it in Rocky III (1982).

“I wanted to look like Tarzan – sleek, tight, almost catlike,” Stallone said of his turn in Rocky III in a 2017 Instagram post. “I wanted to forget the bulk and go for well-developed muscles. I wanted the movie to be about change – how people have to adapt to different challenges because, if they don’t, they will be conquered. I will always believe that adaptation is the key to survival and that’s what this story was all about.”

To reach fighting weight, Stallone trained much like he did for the first two installments – high volumes of resistance work and conditioning – while his diet underwent an overhaul. “I was on a very high-protein diet,” Stallone recalled. In addition, “I only ate very small portions of oatmeal cookies made with brown rice [and I drank] up to 25 cups of coffee a day with honey.”

The resulting physique, while striking, proved physically and mentally challenging for Stallone, who felt drained for most of the production. “I may have looked pretty good on the outside, but inside it was a very dangerous thing to do.” Stallone said he would get lightheaded between rounds as the strict dieting cut his body-fat percentage to “a really dangerous” 2.9.

Stallone’s crash diet for Rocky III stands as a cautionary tale, and its ill-effects prompted him to pursue a more rounded physique for subsequent films. However, were it backed by a sound nutrition plan (read: more kilojoules) the training program for Rocky through to Rocky III can provide a blueprint for a fight-ready body.

For the 1985 sequel to First Blood, Stallone farewelled his Tarzan-body ideas and stacked on muscle to fill Rambo’s muscle tank. His extra size coincided with the making of Rocky IV, in which Stallone unveiled a stronger version of the character – necessary to face the Apollo-slaying Soviet behemoth Ivan Drago (Dolph Lundgren).

To help him get bigger, Stallone recruited the Italian bodybuilding legend Franco Columbu, a two-time winner of the Mr Olympia title and former Schwarzenegger training partner. “I had to charge Sly a good amount for the training because he wanted to train full out, just as if he were preparing for the Mr Olympia contest,” Columbu said of the eight-month period he devoted to creating the Rambo body. “That meant two workouts a day, six days a week. I had to drop almost everything else to concentrate on getting him in the best shape of his life.”

In the mini-documentary The Rambo Workout, some of Stallone’s co-stars can be heard lauding his dedication to training: “That guy re-moulded his entire body – I’ve never seen anybody do that,” says Charles Napier. Stallone was up at 5am to hit the gym before a full day’s work, followed by another gym session. In a clip, Stallone – wearing his Rambo headband and voluminous ’80s hair – says: “It was about eight months of training, four hours a day, to toughen myself up.” He describes taking advanced courses in SWAT combat, archery and survival.

Above all else, though, it was the addition of hypertrophy training (and surplus kilojoules) that resulted in the creation of a stronger action hero that would be his go-to for years – decades – to come.

Gerald Ford was the US president when Stallone first gloved up as Rocky, and while the franchise lives on in the Creed movies, Stallone’s career at times has been, well, a little rocky. The past decade, however, has seen a resurgence in his fortunes and fitness. You could call it a career reboot, or the Stallonaissance: Rocky and Rambo have both made their big-screen comebacks, while the addictive Expendables franchise has been very big business.

Though Stallone won’t be appearing in the upcoming Creed III, he hasn’t let his boxing training slip. The actor is still sharing workout routines with his followers on Instagram, including more than occasional fist-throwing sessions with celebrity trainer Gunnar Peterson, the man behind Hugh Jackman’s Wolverine body.

The training has been necessary for Stallone’s latest work, the Amazon Prime series Tulsa King, in which he plays Dwight Manfredi, a mobster sent to Oklahoma following a 25-year prison sentence. According to Stallone, the project – a hybrid mobster/Western from the makers of Yellowstone – has been “so much fun” but also one of the hardest-working experiences of his life. “What we came up with is something extraordinary and life-changing for me.”

Even in his 70s, Stallone won’t stop working with weights – and with good reason. According to research published in the Journal of Strength and Conditioning Research, strength training (4-5 sessions per week) can lead to significant gains in muscle mass (and counter age-related atrophy or sarcopenia) in men over the age of 60.

“Sly wants to get in, get after it and get out,” said Peterson in an interview with Men’s Journal. “There are so many demands on his time right now.” Peterson has put Stallone on a plan that includes free weights, cables and sled. “One of our usual rounds is having him push the sled, then pump out a bunch of push-ups.”

And though it’s Peterson calling the shots, Rocky’s onscreen trainer Duke said it best in Rocky VI when explaining what a mature man can still achieve in the gym: strength! The kind that produces “heavy duty, cast-iron, pile-driving punches that will have to hurt so much they’ll rattle his ancestors”.

Opt for a summer, beach-based circuit that will target your whole body and leave you more cut up than one of Rocky’s vanquished opponents

WHAT TO DO:
Take a backpack with you to the beach and fill it with sand for a DIY medicine ball to use for the squats. Do 3 rounds of the following moves:

You’re going to need agility and conditioning to crawl, Rambo-style, through the mud of life

WHAT TO DO:
SUPERSET 1
• 50 Double-Unders
• Alternating Barbell Walking Lunges (12 each leg) x Do 5 rounds
Work within your limits if double-unders are beyond you for now.

You’ve taken your share of blows, but you’re not about to be counted out just yet. Be sure to warm up – Stallone jogs to the gym with his dog

PHASE 2
Working at around 60 per cent of your IRM, each of the following exercises should be performed in isolation for 3 x 8-12 reps. Take 45 seconds rest between sets.
• Barbell Bench Press
• Single-arm Overhead Kettlebell Press
• Dip (with heavy chains around your neck if you’re Stallone)
• Cable Lat Pulldown
• Incline Press
• Pull-up (with 20kg plate if you’re Stallone)
• Jog home (Don’t forget the dog!)